Every so often I’ll be dusting off an album that deserves to be better known, in a series called Forgotten Gems. The first of these is a classic from the Hat catalogue....

Urs Blöchlinger Tettet:  Neurotica (Hat Art)
During his lifetime, Swiss saxophonist Urs Blöchlinger recorded in solo, medium and large group settings on labels such as Plainisphare, Unit and Creative Works. He performed with the cream of Swiss jazz talent (such as George Gruntz, Hans Kennel and Peter Schärli) as well as visiting musicians (Carla Bley, Tom Varner). He also wrote music for theatre and film. 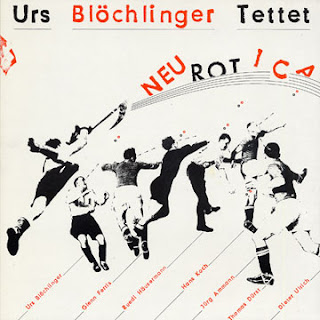 Neurotica was recorded by his 7-piece Tettet and released as a double LP on Hat Art in 1984. The band comprised five Swiss musicians, reedsmen Hans Koch and Ruedi Häusermann, pianist Jürg Amman, bassist Thomas Dürst and drummer Dieter Ulrich, plus America trombonist Glenn Ferris.
Nine of the eleven tracks on the recording were written by Urs, with theatrical (!) titles such as King Arthur meets Hanns Eisler in Hollywood. The soloing is first class, and the arrangements appropriately quirky. There is a great energy to the album, and a sense of fun.
Urs took his own life at age 40 in 1995. Neurotica stands as reminder of a fascinating musician and an excellent band. Sadly it has never been released on CD.
Posted by Pete B at 19:34